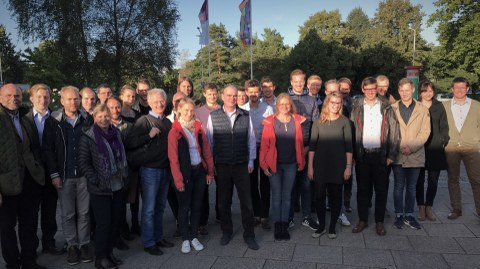 re:publica, a conference focusing on issues related to the digital society, took place from 5-7 May in Berlin. What is unique about the conference is that it brings together people from various backgrounds such as researchers, business people, political activists, journalists and bloggers. The diversity is reflected in the program and I tried to gain a broad overview of all topics covered.
Some of the talks provided food for thought. I attended talks about corporate surveillance in the age of digital tracking, big data and internet of things as well as talks about how activities of intelligence agencies sabotage official foreign policy objectives. Furthermore, whistleblower Annie Machon talked about her experiences as a MI5 intelligence officer and how the „war on concepts“ (i.e. the wars against drugs, terrorism, internet and  whistleblowers) is misused to restrict civic rights.
At the same time also cool stuff is happening: I visited the „Global Innovators“ talk and learned about local hacker, maker and start-up scenes in Singapore, Zimbabwe, Kenya and Brazil. Moreover, I took chance to attend a 3D printing workshop and learned about collaborative knowledge production in the context of „book sprints“ and online collaboration in the context of the German blog vierzehnachtzehn.de, which publishes entries of a war diary exactly 100 years after World War One.

Last, but not least, a major re:publica highlight was the talk of astronaut Alexander Gerst, who enthused the audience with his pictures and anecdotes from his six-month-stay at the International Space Station. The video is now online!

Last month we presented our research on innovation diffusion at the annual meeting of the Technology, Innovation, and Entrepreneurship (TIE) section of the vhb. This year this event was hosted brilliantly by Joachim Henkel, Christina Raasch, and Tim Schweisfurth at the Technical University Munich (TUM). We enjoyed meeting old friends and colleagues and make new acquaintances and exchanging ideas and thoughts on innovation and its management. Very interesting keynote speeches came inter alia from Carliss Baldwin (Harvard), who was awarded an honorary degree by TUM, Ben Martin (SPRU), and Dietmar Harhoff (MPI Munich). We are already looking forward to next year’s meeting!​

Next week takes place the SMS Special Conference in Copenhagen. The conference topic is „Micro-Foundations for  Strategic Management Research: Embracing Individuals“ and features Richard Rumelt, Ronald Burt, and Ernst Fehr as plenary speakers. I will have the opportunitiy to discuss my current research-in-progress with Sebastian Späth in Copenhagen and am very much looking forward to this interesting program! I’ll also most probably twitter from the conference (#SMSCph), so stay tuned.